Start rewriting this website in XHTML 1.1 Strict and CSS 2.1

Pictures will be replaced by beter quality copies.

The archive files are in Dutch language.

If you have any questions about this transceiver, than contact me first. Better don't bother PA0CHN about this dated design.

In 1979 Cor, PA0CHN developed a 10 Watt SSB/CW transceiver for 80 and 20 meters. The idea was to design a rig that could be successfully build by a lot of amateurs and, not at least, had good specifications. No hard to get components were used and, if necessary, parts like: chassis, PC-boards, ball drive or X-tal filter etc. could be ordered via a service bureau.
Over hundred rigs were build throughout the years and many of them are still used. I build mine in winter 1996 and had to use some equivalent semiconductors because the original types were not available any more. The complete transceiver has been published (8 parts) in the VRZA's periodical "CQ-PA".

The transceiver is build up in six modules, all placed in tin plated cabinets except for the PA module. The receiver is a single-conversion design with a 9MHz IF.
The local oscillator is tuned from 5.0 - 5.5MHz covering the two bands by both upper and lower mixing. An additional digital frequency-counter and the well known "huff-puff" VFO stabilizer both designed by the late Klaas, PAøKSB completes the rig. Here is a full screen picture of the (scanned) block diagram. The quality is not superb, but it is authentic!

With a spare set of pc-boards bought from a local radio amateur I started the job. All chassis work and even the tin cabinets are homemade using fret saw, file and other hand tools. The main chassis and enclosure are made from 1,5mm aluminum. For front and rear panels I used 2mm alu. I have a Drake-4 line too, so it's not a coincidence that the front panel layout looks a bit like the R4C. The outside dimensions are 22 x 24 x 10cm.

All boards are supplied with a print-edge connector, so almost all wiring is done at the bottom side. Also the low-pass filters have got a place there.
Module after module was build, wired and tested starting with the LF module. Besides the audio amplifier (TBA800 6Watt), in this module are placed: the carrier oscillator, balanced (de)modulator, microphone amp and Rx/Tx switching circuit. 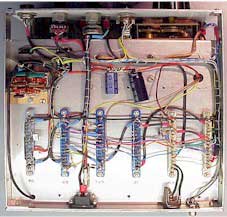 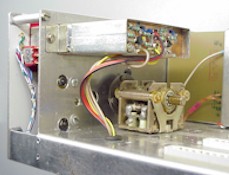 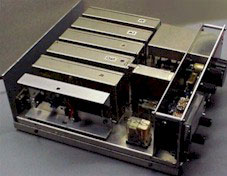 In the CW module the carrier signal is keyed and shaped. Also an audio sidetone is generated and fed back to the LF module during key down. In the upper right corner is a simple but very effective audio filter. It's an LC-parallel circuit (88mH/1uF) switchable from audio signal to ground.

The next module to build and test was the IF circuit. The first stage is a common-gate JFET amplifier i.a. to match the impedance of the XF9B filter (KGV). Next are two good old(?) 40673's and a 2N3819 for the AGC circuit. The drain circuits are tuned on 9MHz using 10,7Mhz TOKO transformers and additional capacitors. These TOKO's are used wherever tuned circuits were needed, also for 3,5 and 14MHz!  Some stages of the IF module are commonly used for receiving and transmitting, switched by diodes.
The 5.0 - 5.5MHz local oscillator, RIT circuit  and the double-balanced diode mixer are all in the VFO module. The mixer is build up with four silicon diodes (1N4148) and a pair of iron powder toroids T44-2. The tuning capacitor is mounted on the main chassis and connected to the circuit with thin teflon coax cable.

The output of the buffered oscillator signal is also applied to the additional frequency-counter. This counter is build with low-power consumption integrated circuits (74HCT family). Both VFO and carrier-oscillator signal are measured and the resultant frequency is shown at the led display. The buffer-amps of the counter are outside the cabinet on the rear panel.
Completely shielded, at the right side of the tuning capacitor is the VFO stabilizer ("huff puff").

Still two modules to go now although some radio signals could be heard by connecting an antenna directly to the balanced mixer. Whoww, it worked!

The RF module is split into two parts. The antenna signal is fed to a band-pass filter followed by a dual-gate mosfet (BF900) amplifier. I did some front-end experiments, so the picture doesn't show the original design. The band-pass filters in the drain circuit are also used during transmitting. This signal is routed to the pre-driver stages (second part of the RF module) and after a last filtering applied to the PA module.

The original PA was a balanced amplifier using 2 x 3 LF semiconductors, the BD137. The driver stage was an 2N3866. I replaced the BD137 transistors by two modern HF types, the 2SC1969. This transistors are used for CB-band transmitters. The driver stage is a 2SC2166 now. More than 10Watts output on 80m is no problem. I reduced the output for 20m to a 5Watt level (QRP rules!) 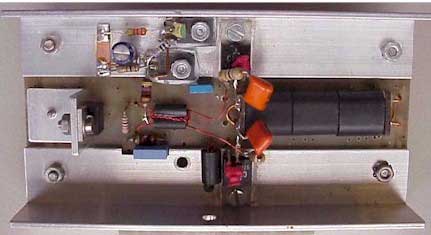 That completes a short description of my 2-band transceiver. Maybe I will add a 40m module because the band switch is already prepared. For QRP qso's I only use the 20m band and I've worked some nice DX (VK, KH6, XE, JA, CE) with my 3 element yagi. Even HL (South Korea) was worked with a simple sloping dipole during my holiday trip in the Ardennen (ON-Belgium) in 1998.